Independence was known as the “Hop Capitol of the World” from the 1890s to the 1940s, but the history of our City is so much more than just hops. Our museum was formally housed in the former First Baptist Church built in 1888. We opened in our new location on April 30, 2022. 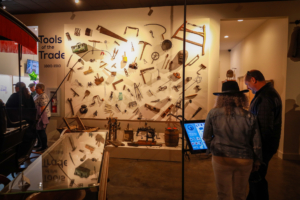 Today we are located in a historic building that has served many purposes over the years. Originally, our building housed the M & F Grocery Store which opened in the early 1940s and continued in that location until 1978.  In the 1970s it was managed by Robert Mason and his family until it closed.  Following their departure the location became home to a series of thrift stores, antique stores, and miscellaneous stores. It was sold to the City of Independence in 2019 for use as the Independence Heritage Museum.

For more information, visit the heritage museum website at: https://www.orheritage.org/