Where to Hear Live Music Around Independence

Creativity, in its many forms, is part of what makes Independence tick.

How else would you explain the city’s innovative chefs and bakers, our dedicated entrepreneurs, or our bustling arts and culture scene?

It’s no surprise, then, that sense of creativity has made its way to music around town. From live concerts with local acts and regional musicians alike to our very own community-focused gear shop, Independence hums with the sounds of live music all year long. So here’s where to hear (or make) some fun tunes the next time you’re around town. 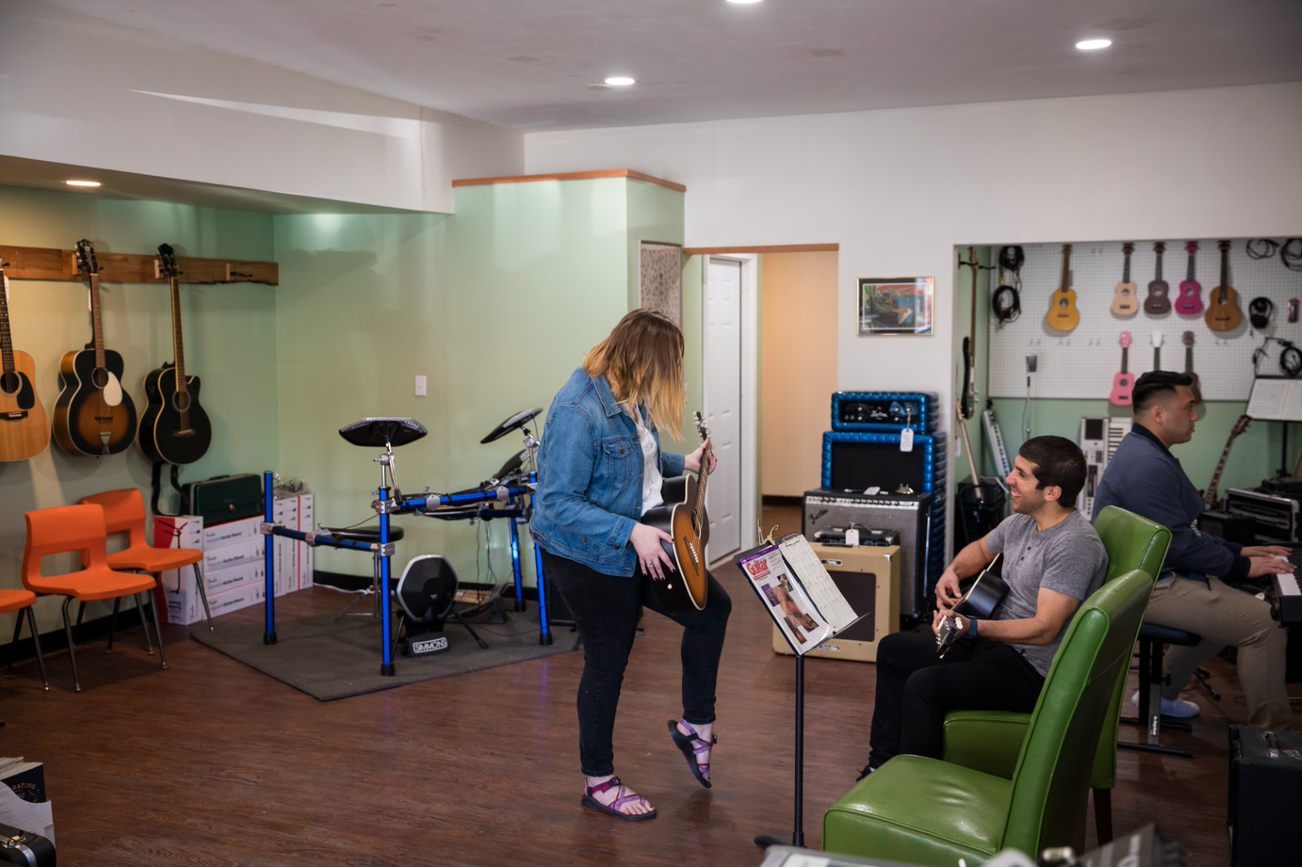 Every summer, the hottest ticket in town is for whoever’s playing the River’s Edge Summer Series—an annual concert series at the Independence Amphitheater in Riverview Park, between downtown and the Willamette River.

Granted, tickets are free—but the lawn fills up on warm Friday nights in July and August, when local acts and regional musicians alike take the stage for two hours of family-friendly entertainment. Highlights in 2021 include The Junebugs (a Portland-based folk rock trio that performs a mix of covers and original tunes), blues rocker Ty Curtis, The Boondock Boys (video below), Infamous Soul, and Romance (which performs traditional Latino music—including romantic and classical boleros). Local food trucks sell a variety of cuisines, and a beer, wine, and cider garden rounds out the fun.

Salem’s Gilgamesh Brewing opened its first outpost in Independence (and third overall) in 2020—and the new pub (known as The River, partly for its close proximity to the Willamette River) boasts all the hallmarks of a classic community gathering spot. Massive windows let in plenty of natural light, a shaded (and spacious) back patio offers plenty of room to relax, and a (covered) platform sets the stage for live music performances.

As the weather warms up each summer, the plan is to host musicians and bands on the brewpub’s outdoor space; there, attendees can enjoy the show from Gilgamesh’s ground-floor patio or from a pair of outdoor balconies. 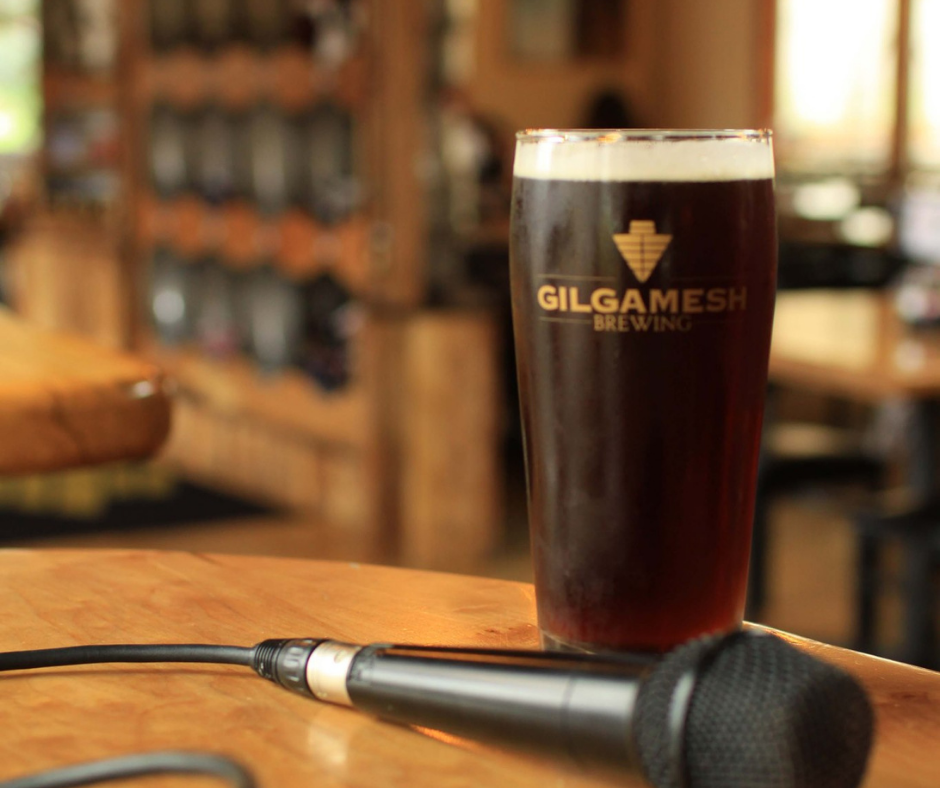 Indoors and out, Brew Coffee and Taphouse has worked hard to cultivate community in the heart of downtown Independence.

Indoors, that means sipping locally sourced coffee, beer, and cider with friends and loved ones on comfortable couches.

But outdoors, that close-knit community takes shape on the taproom’s cozy back patio, lit on warm summer nights by strands of lights and sound tracked by the occasional live music act. The lineup on the patio at Brew is almost as eclectic as its drink menu, with acts ranging from local singer-songwriters performing original tunes to children’s musicians offering lessons to little ones. 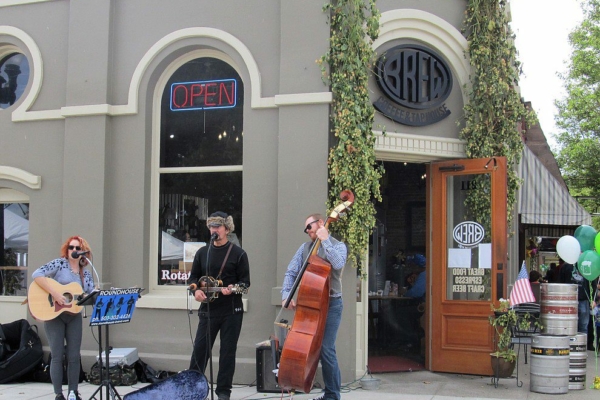 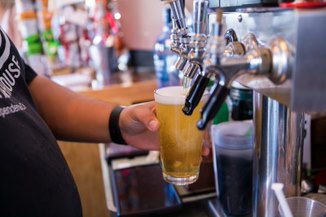 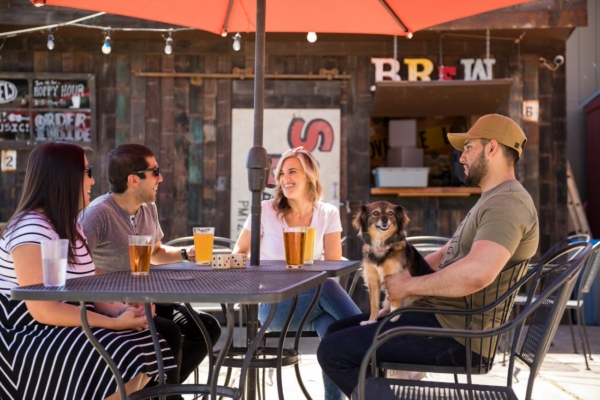 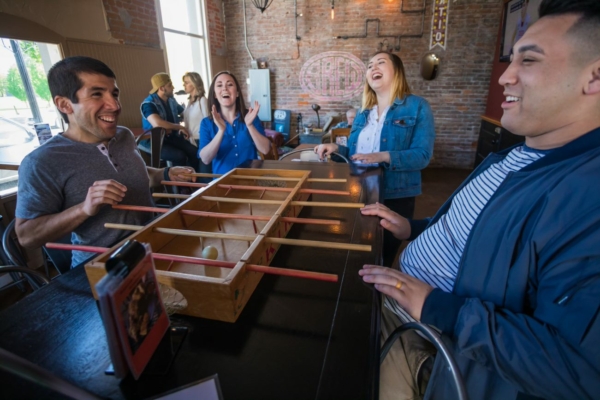 But the entertainment extends to live music, as well. DJs have spun inside, and live musicians have performed on the patio outside—with a variety of genres sure to please everyone in your party. 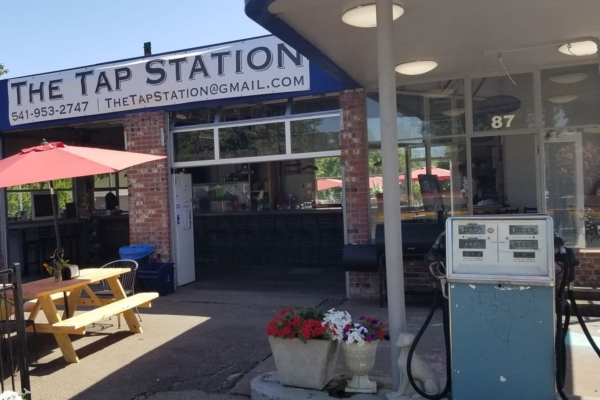 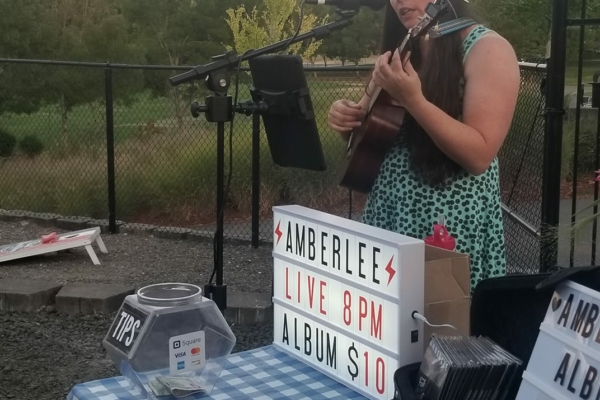 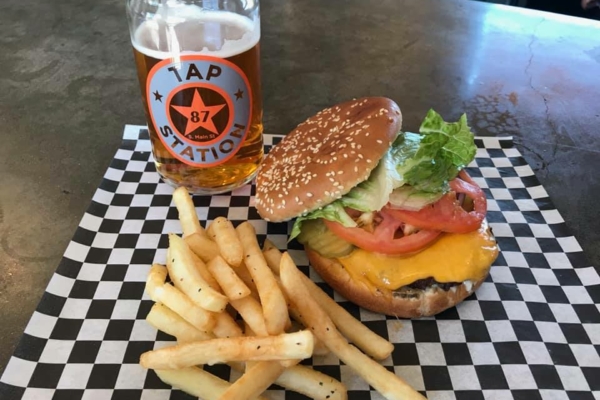 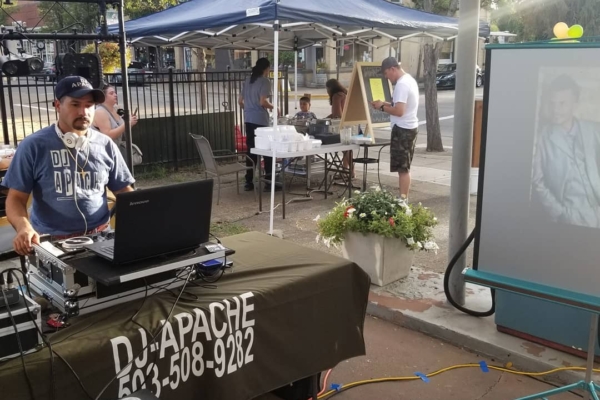 You won’t hear any live music at Musical Independence in downtown. But if you’re a musician yourself, the store offers the gear (and lessons) so you can make some music of your own.

Musical Independence aims to be a pillar of the community by selling a variety of gear—guitars, ukuleles, keyboards, amps, and more—as well as offering lessons, which range from private sessions to free lessons for children. 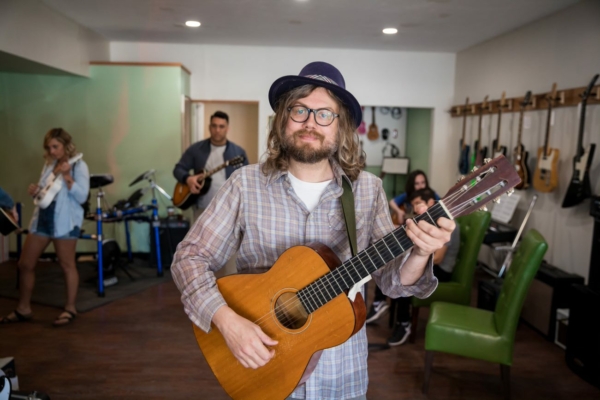 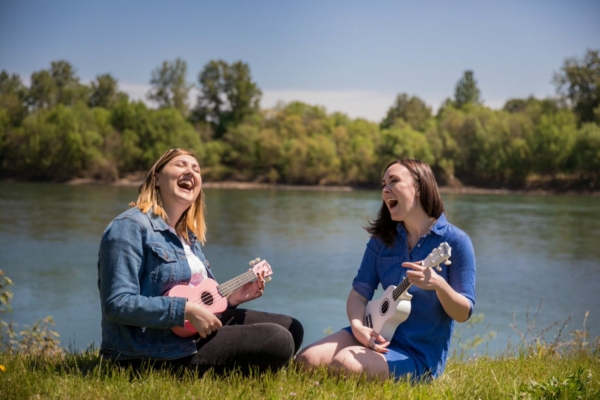 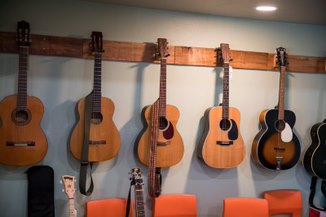 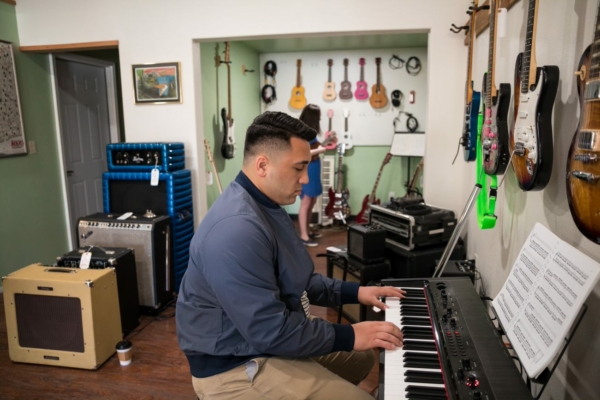 More than 20 award-winning wineries sit within a 20-minute drive of Independence, and many pair their outstanding blends and varietals with live music performances throughout the summer.

Eola Hills Wine Cellars, in particular, has earned acclaim in recent years for its Summer Uncorked Concert Series, held at the winery’s Legacy Estate Vineyard just 10 minutes from Independence. (Tickets are free but, at least in 2021, must be reserved in advance; a VIP option is also available for an additional fee.) The wide-ranging lineup in 2021 includes Hit Machine (a seven-piece outfit performing popular tracks dating back to the 1960s and 1970s), Portland-based Hannah DiMo (showcasing an upbeat brand of pop-rock), and singer-songwriter Sarah Clarke.

Nearby Redgate Winery also offers live music on summer weekends, with styles ranging from bluegrass and rock to rockabilly and rhythm & blues. (One recent set was even headlined by a Grateful Dead cover band.)

Airlie Winery is another tasting room offering live music—most notably as part of its Sounds of Summer Sundays concert series, which takes place between June and August. Musicians perform a mix of jazz, Brazilian pop music, and other genres.

Throughout the month of July, Emerson Vineyards hosts its Summer Music Series just 15 minutes from town. Highlights in 2021 include Robert Meade, a veteran singer-songwriter, and the Leanne McClellan Band—which performs a versatile mix of classic rock, jazz, pop, and blues. 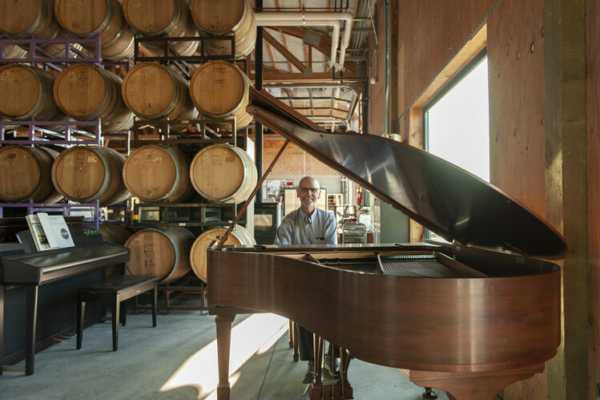 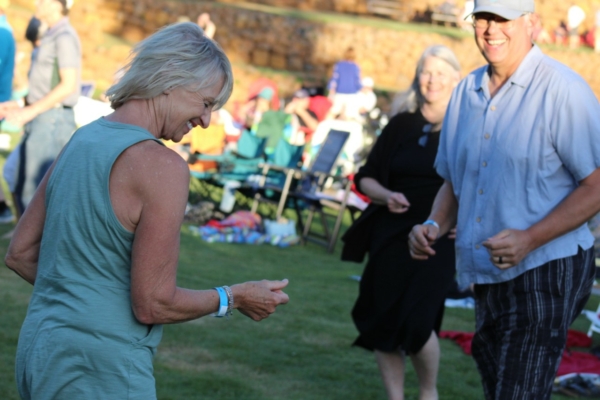 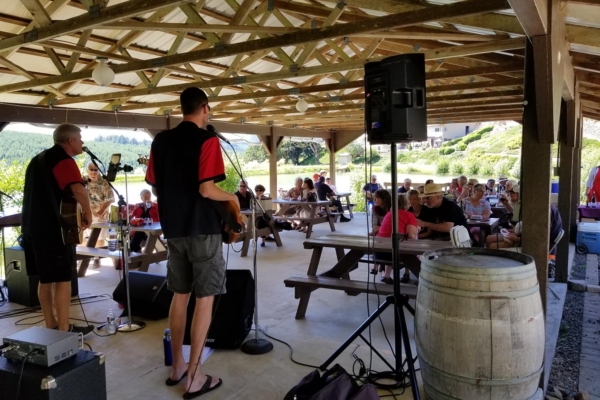